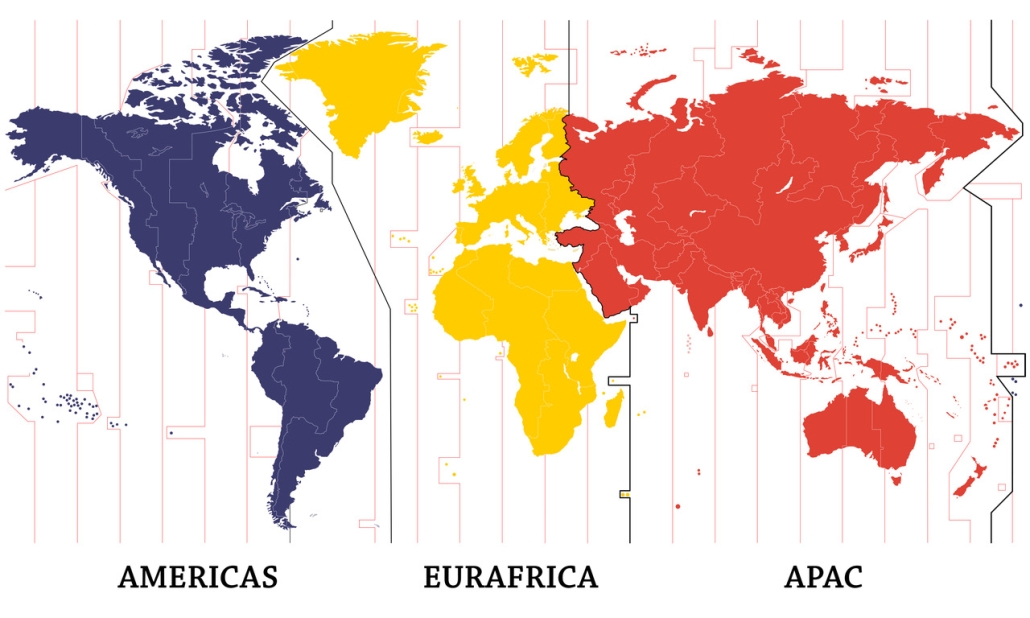 The IRAA defines “Asia” as the greater Asia Pacific coverage region, excluding the Middle East. This is the same as the IAG media coverage region. We define this to be approximately one-third of the globe, covering the longitudes from around 60 degrees east to the International Date Line.

The western edge of the region (from north to south) is the Ural Federal District of Russia, the five “-stan” countries of Central Asia plus Afghanistan and Pakistan (which are muslim majority countries anyway with very little gaming), and then the 60 degree east longitude in the Indian Ocean, meaning that we cover the Maldives but not Mauritius.

We define the eastern edge of the greater Asia Pacific coverage region as the International Date Line, meaning “Asia” includes Vladivostok, Japan, New Zealand and the islands of the western Pacific.

There are only three countries which are partially in the region: Russia, the United States and France. For Russia, the region includes the easternmost three federal districts: Ural, Siberia and the Far East districts. This includes Vladivostok in the Primorye Gaming Zone and the Altai Gaming Zone nestled between Kazakhstan and Mongolia. For the US, the region covers territories in the Asia Pacific west of the International Date Line. The only such territories which are populated are the Commonwealth of the Northern Mariana Islands (CNMI), Guam and Wake Island. Throughout these three territories, there is only one casino, in the CNMI. For France, the region covers the two French territories in the western Pacific: New Caledonia (which has two casinos — both in Noumea) and Wallis and Futana (which doesn’t).

The region is dominated, of course, by Macau. This is followed by the Philippines and Singapore. Other important markets are Australia, Cambodia, Japan, Korea, Malaysia, New Zealand and Vietnam. Both Laos and Russia have potential to grow as integrated resort markets.

The full list of countries in the region is below.